Welcome to our eleventh Development Status update.
It is time for monthly development summary, so let’s get straight to business.

The passing month was full of:

a. Interaction with the tank

Tank inside interaction
We’re working on a method to allow player to get into the tank and roam around inside. Our ideal would be to create a system similar to Red Orchestra’s 2 tank crew role/position switching method.
With or without animations, we’ll give the player an option to switch between crew positions with radial menu (options like switch to gunner’s position, or switch to driver’s position etc.).

We’re getting rid of special info panel, that shows tips about object the player is currently looking at. Now when player opens up radial menu while looking at object, the options available in the menu are shown, based on the type of the object.

Another thing to finalize is the first tank in the game – the Tiger I. We’re gathering all the data we can get, mostly about the tank interior and different Tiger unit’s history.

We’re planning to set the scenario of the Tiger extraction in eastern Europe, in a river or in a bog. Story would be, that the Tiger tank was part of a unit, that fought during the Third Battle of Kharkov. During a river crossing, the unit was attacked and the tank was damaged, falling down into the river.

The Tiger we want to implement, is the H1 version, produced between 1942- early 1943. Here’s few screenshots we took in War Thunder, to make a comparison between H1 and E versions. 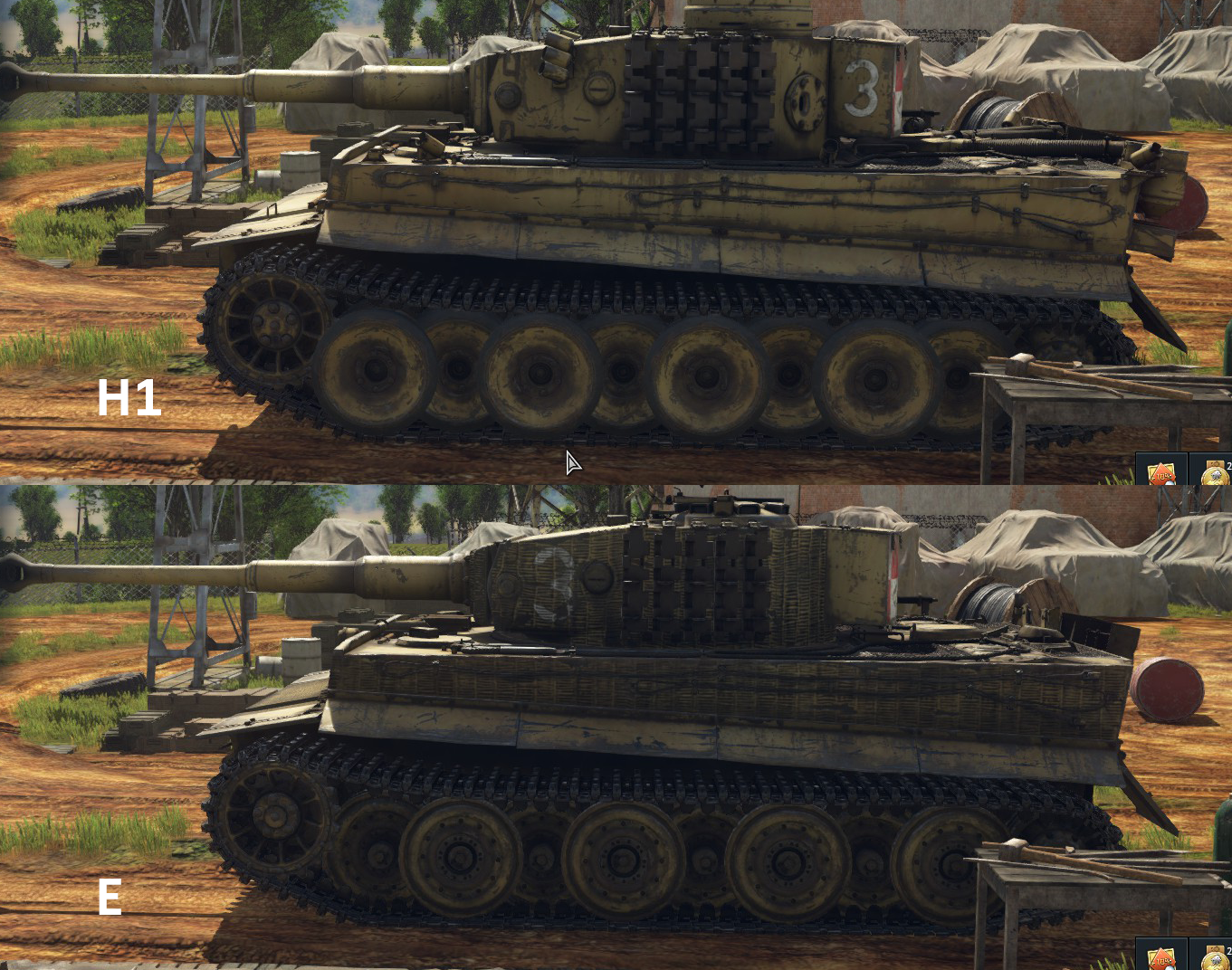 We’re also making small fixes to the turret, the turret basket needs to be fixed to the turret. We’ll need to add a frame or tank turret holder somewhere in the workshop, to allow players to renovate the turret/barrel etc.

Our previouse approach to tank turret. Now the thing will have the turret basket fixed. 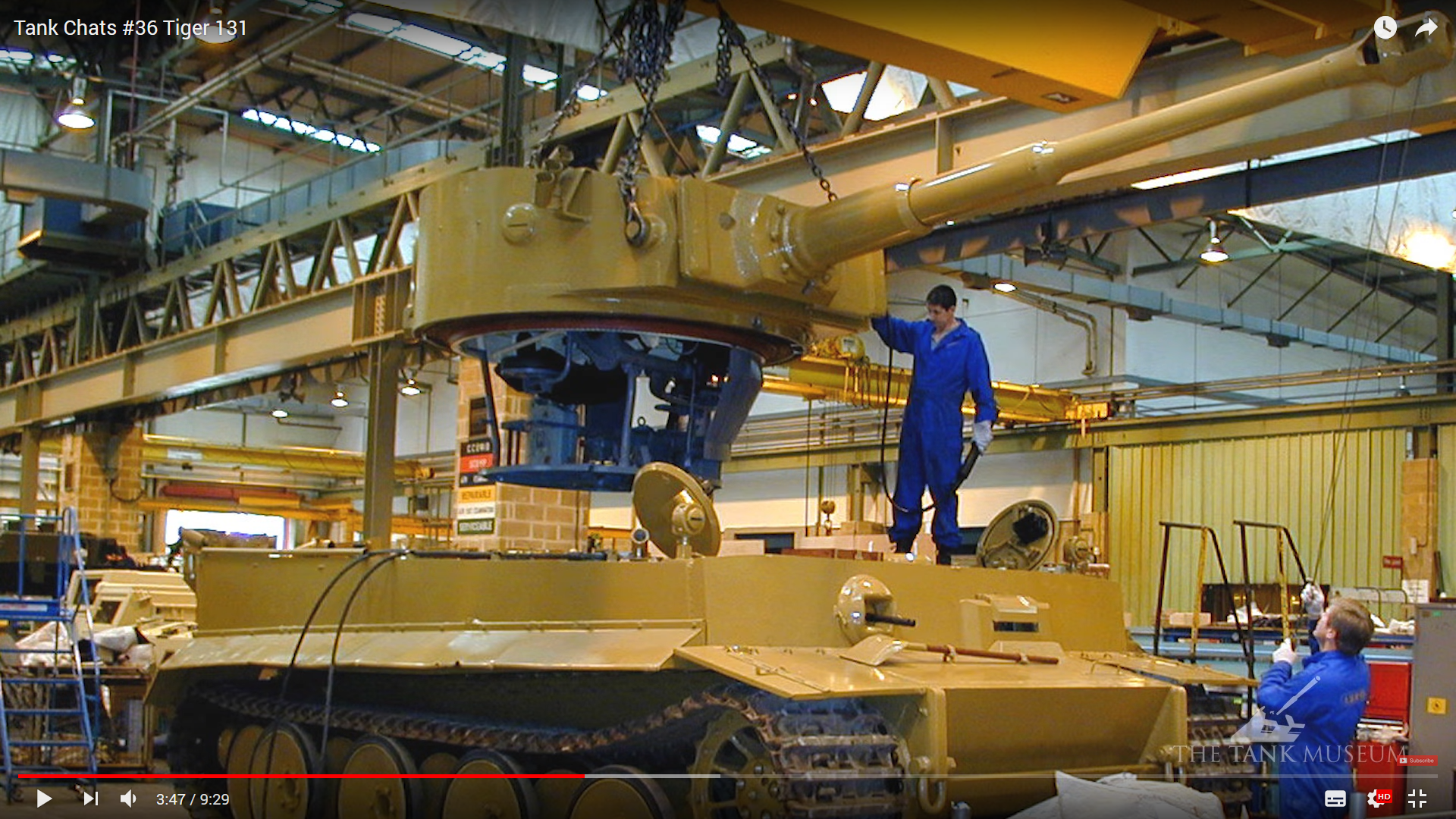 2. Why were we struggling with crane and chain physics

For now only the chain connecting the hook and the turret is physical, the 3 chains attached to the turret are static.

As we’ve mentioned in previous monthly summary, we’ve bought Obi Rope system, that allows us to create complicated physical ropes/chain systems. The problem is we’re having is the stability of the whole construction when we connect chain that is hanging from the hook to the 3 chains connected to the turret. Whole thing gets messy both with fps drop and jittery movement.

We have two options here, either find a perfect line between performance and physics realism, or to add some kind of a option in video/performance tab in game options, to allow custom control over how much the physics should be simulated.

Yep, we’ve been eating and drinking alot. Spending time with family and other stuff. Nothing interesting here. Gathering thoughts and ideas before starting new year 😉 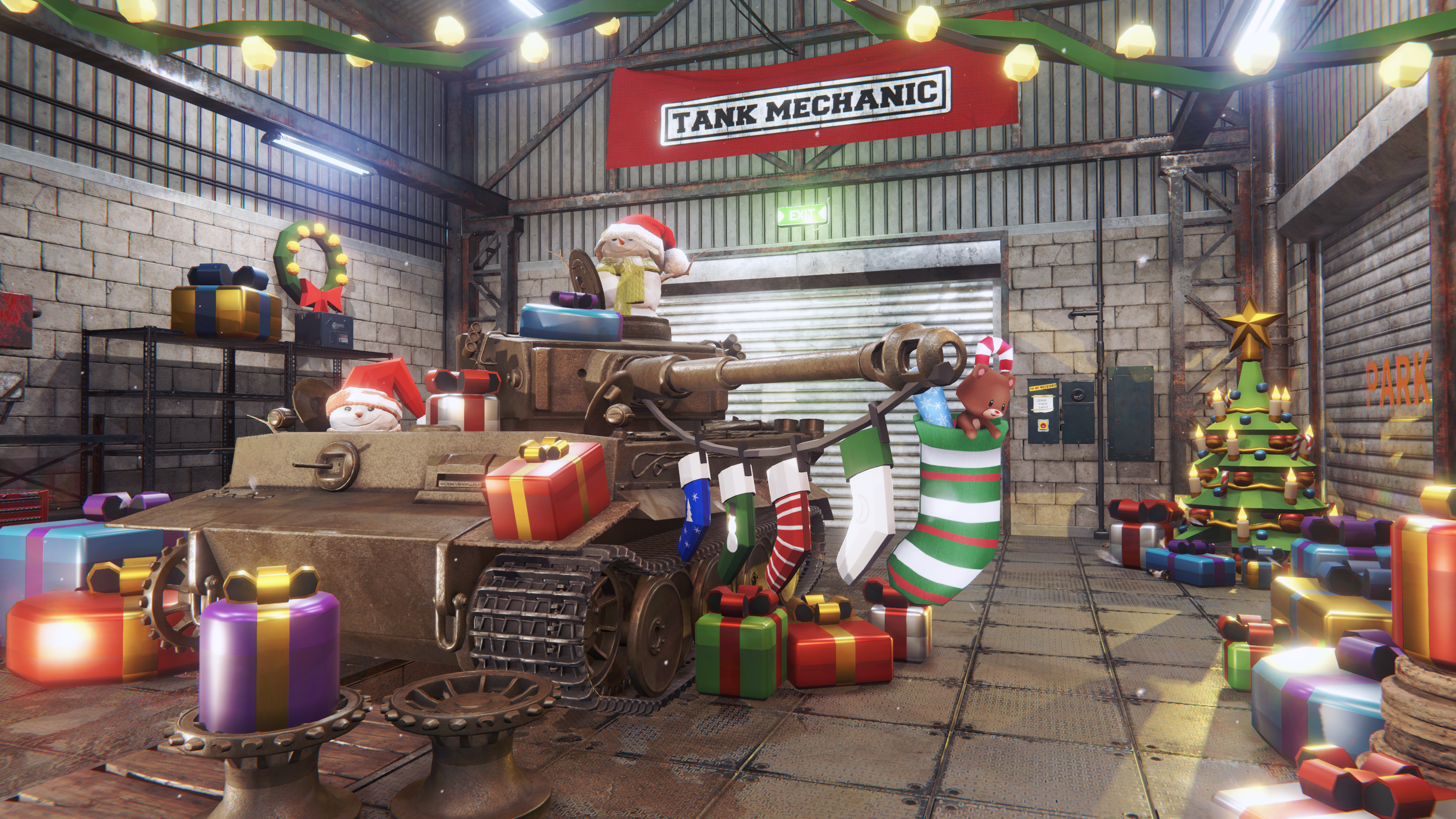 So, to sum up, last 3 weeks were full of unspectacular job (3 weeks b/c christmas + week between christmas and new year’s eve). We want to finish the design of the game by the end of January – by that time all aspects of the game should be designed in a final state:

That would be all for this week and month. We wish You a happy new year 😀

Have a good day and see You next year! 😉

Welcome to our tenth Development Status update.
Let’s get straight to business.

We’ve been working on basic user interface logic. Alot was designed or redesigned from scratch, including:

Most of the work was spent on radial menu implementation (which is still WIP). The main purpose of the radial menu is to be as useful for the player as possible. The menu will display options based on what the player is currently looking at. 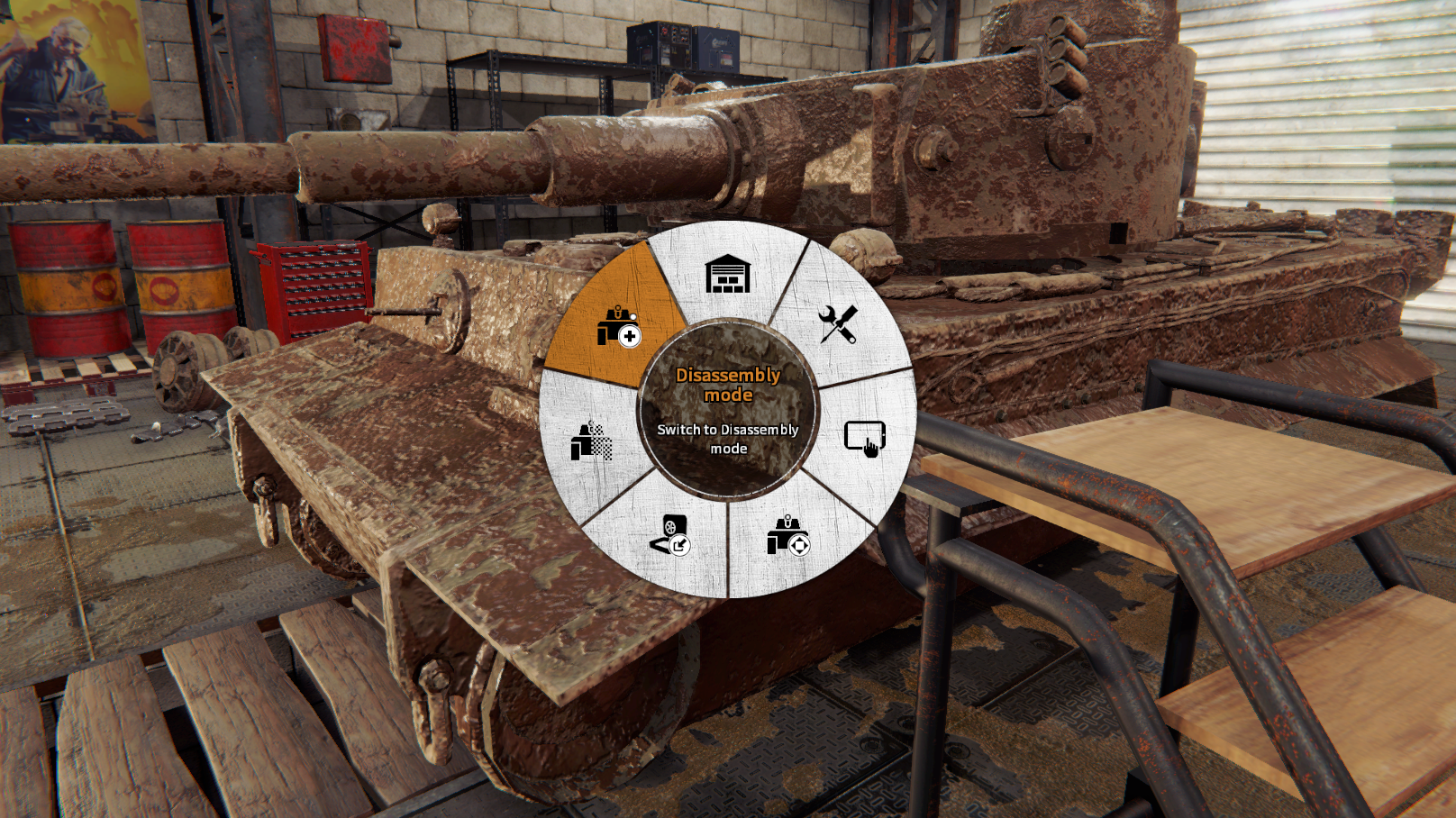 We want to finish all design by the end of January 2018. By then every aspect of the game needs to be planned. We’re going to poll few votes to get Your opinion on most important topics 🙂

Did You know that Santa visited tank restorers this year?

Merry Christmas and see You next week! 😀

Welcome to our ninth Development Status update.
Let’s get straight to business.

Crane system is finished. The crane uses Obi Rope system, that allows us to simulate physical rope/chain in our game. Player can control the crane by using the controller:

To hook an object player needs to touch the hookable object with the hook or chain attached to the hook.We’re designing how the process of hooking/unhooking the lift needs to look in the final version.

Lifting the turret. We still need to make the chains connecting the hook chain to the turret more physical. For now its just a static model. Perhaps we will add an option in performance options with different physics simulation presets.

Remember to control the crane with load attached ot the hook with special care. Any collision now might bring alot of damage.

Player will be able to disassemble/assemble liftable tank modules while hooked or when stationary (for example the engine can be interacted with while outside the tank and when it is hooked, turret needs to be put down first).

That would be all for this week.

Have a good day and see You next week! 🙂

Welcome to our eight Development Status update.
Let’s get straight to business.

We’ve been working on crane physics. To achieve physical chain that connects hook to any hookable element, we’ve acquired Obi Rope asset from Unity Asset Store. We’re still learning it and we need next week to make the final setup for  workshop crane chains. 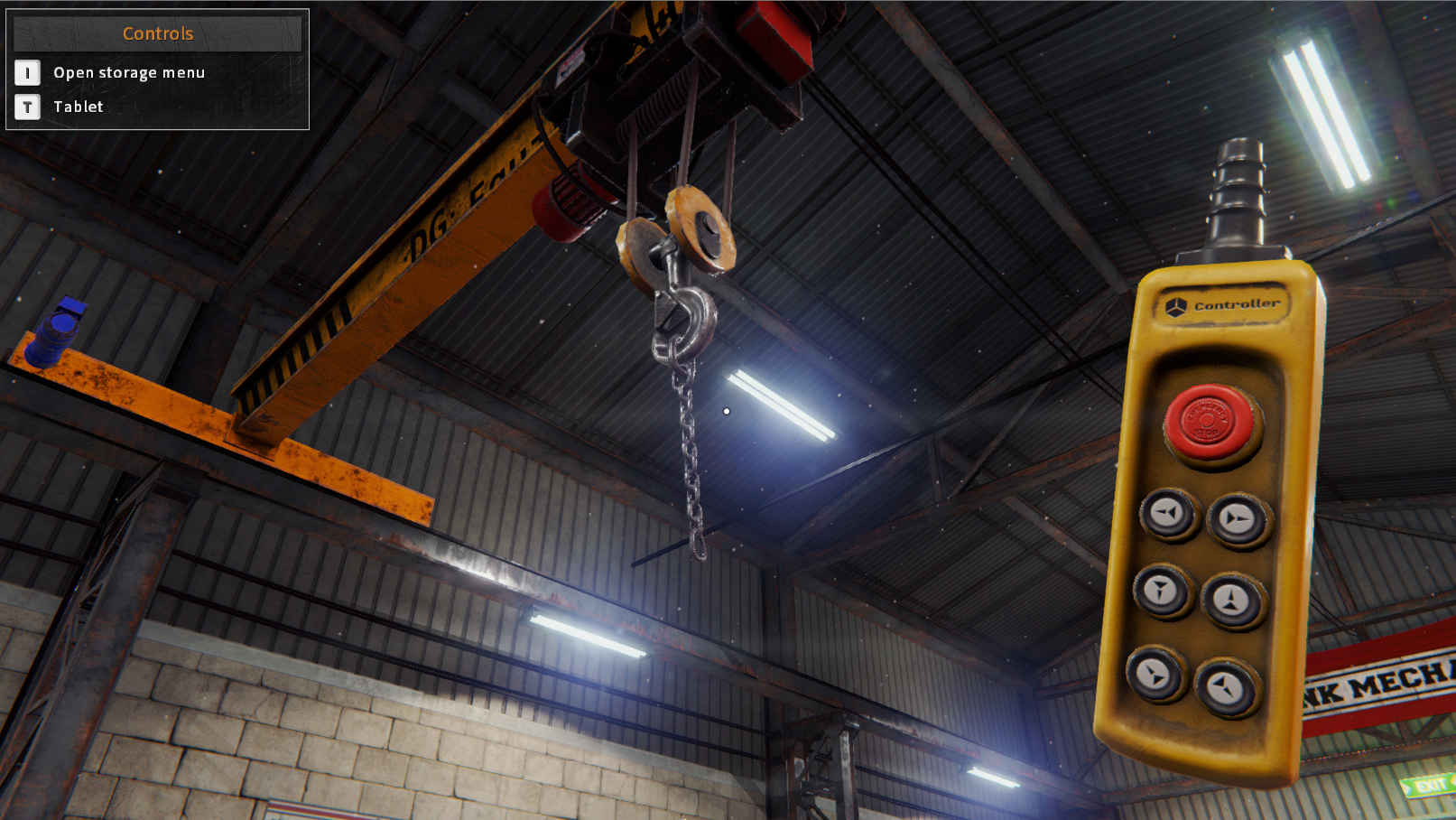 The new chain system. Nothing attached. 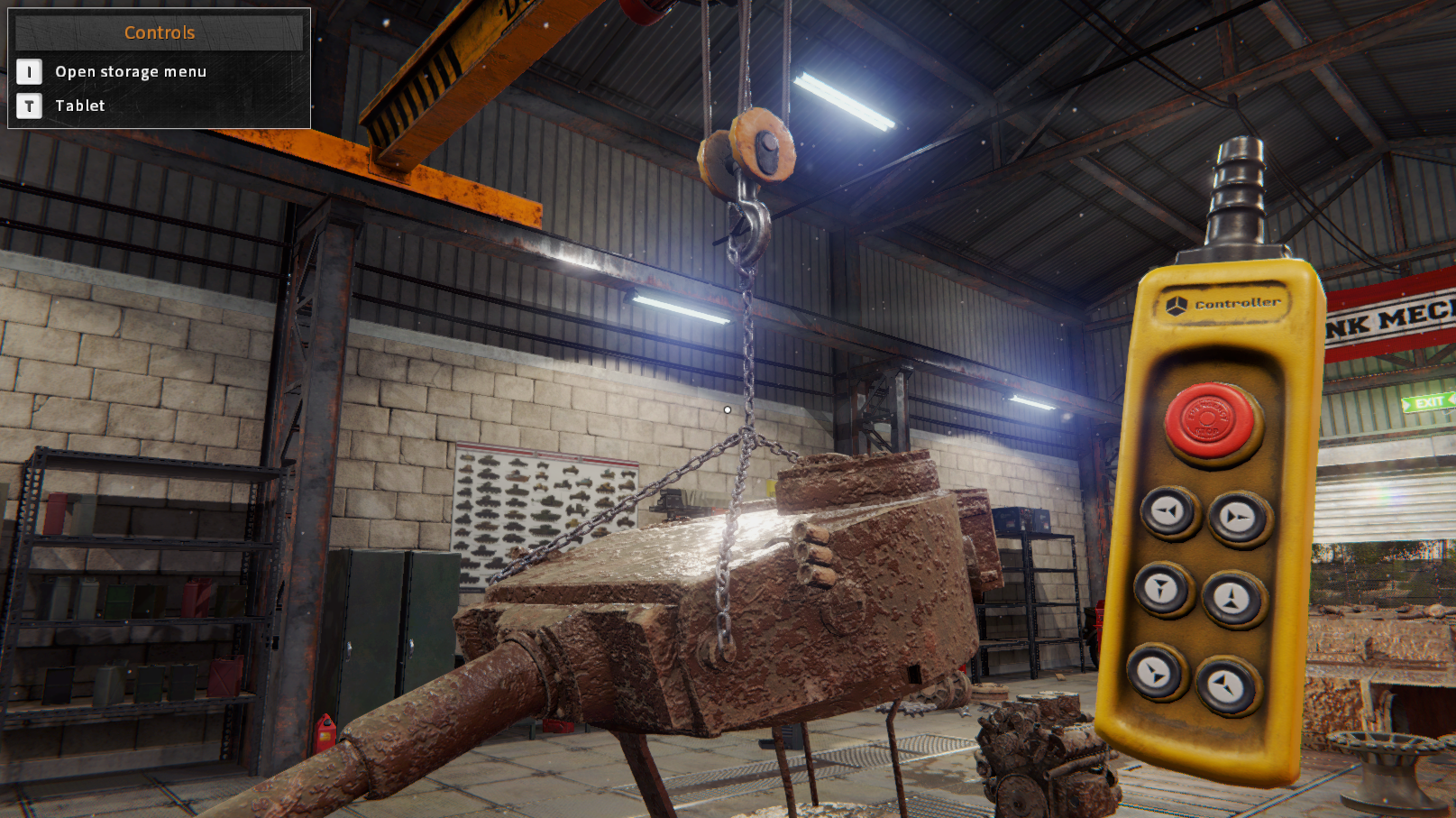 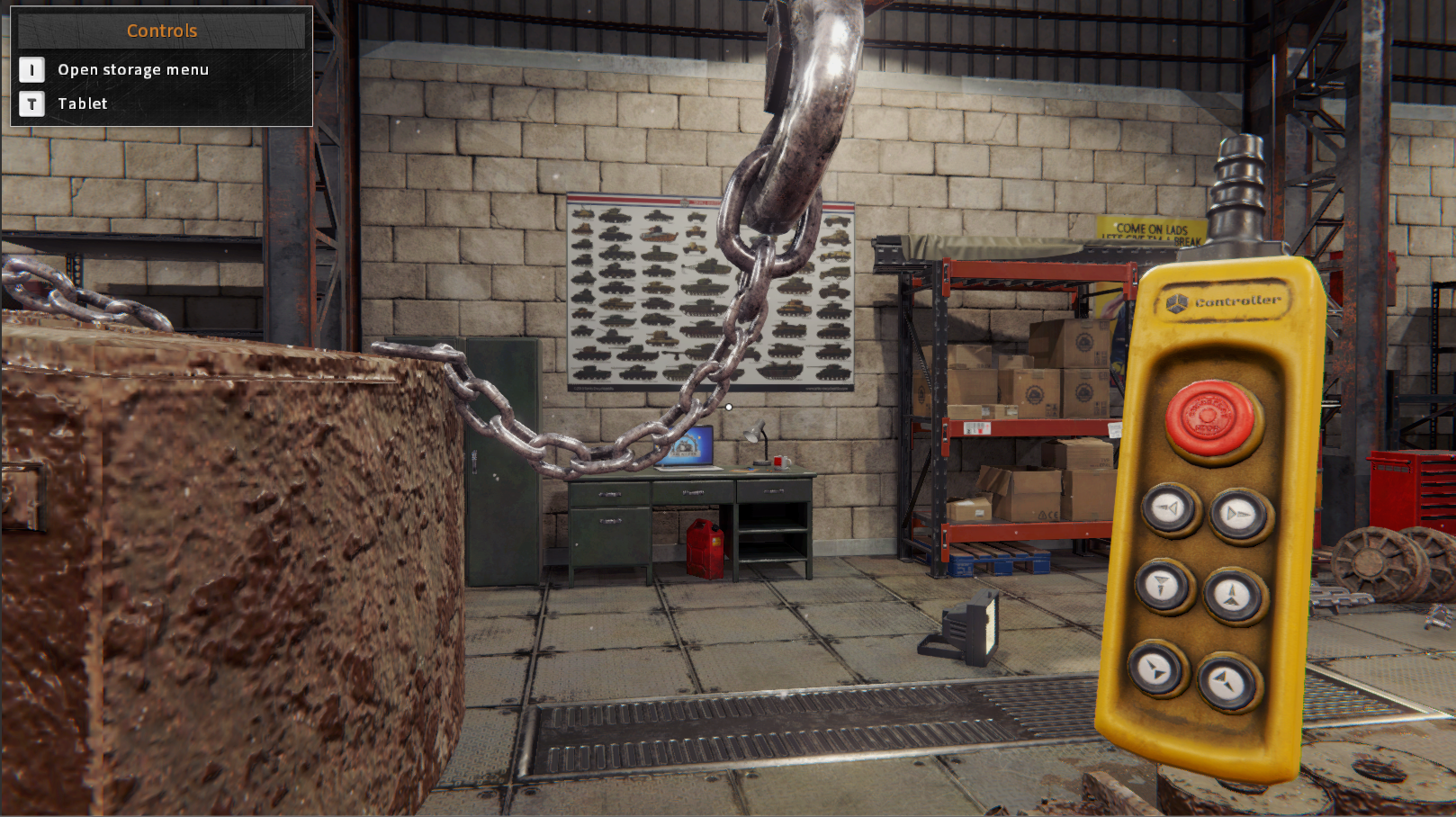 Unfortunately we did not manage to set up the system and our crane 100% properly this week. Next week we’re getting this up and running. Be ready for some gifs 😀

That would be all for this week.

Have a good day and see You next week! 🙂